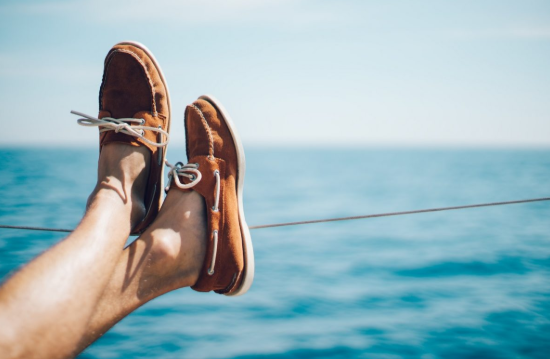 When sailing, footwear is an important article because without the right shoes, you can slip on the wet surfaces or damage the deck. The style variations have increased over the years, but a rubberized sole is the common factor. The average price for sailing shoes in July 2009 falls around $55 to $130. 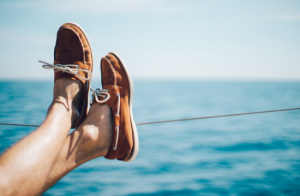 This is the classic sailboating shoe that became mandatory for any sailor in the 1930s. These slip-ons have a moccasin-like look with a leather upper. It has a razor cut wave sipping rubber sole, which works well for gripping onto wet decks. As of July 2009, these shoes were priced at $70 to $80.

Some casual sailors swear by these popular shoes. The rubber soles are great for gripping onto the deck, and they do not leave marks. They are designed with a resin that molds to your feet that has an anti-microbial agent to eliminate odor. With the perforated holes on top, sand or water can easily pass through, and the material dries quickly. As of July 2009, they could be found for $20. 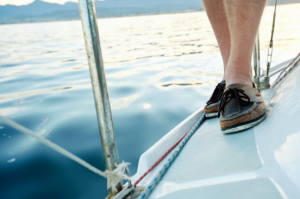 Influenced by the sporting shoes typically seen in running, these athletic looking sailing shoes are made to handle the waters. The Sebago Alpha has a water-resistant synthetic upper and a breathable mesh to keep feet arid. Similarly, the Cascade Course offers women a breathable mesh and fast drying synthetic upper. The elastic cord lacing is also a nice feature compared to the troublesome leather laces of traditional sailing shoes. As of July 2009, these shoes cost around $90.

Developed with the United States Sailing Team in mind, this neoprene boot is an ideal companion for dingys or small keelboats. A velcro closure makes the boot easy to take on and off, unlike many other neoprene boots. It has an exceptionally sticky sole, making it a secure shoe to have while tacking and sprinting from one side to the other. There also are small drainage holes at the bottom. As of July 2009, these shoes were around $70.