A camping trailer is designed to fill a niche between a large, full-function motor home and a tent. While a motor home is self-propelled–a house with an engine–a camping trailer is a much simpler, usually smaller offering. When one looks up camper van rental in the location that they are planning to spend their vacation, they might be planning to host four to eight people, and these vehicles usually come in many shapes and sizes. There are models that are designed to be towed behind a mid-sized car, while others require a powerful pickup truck to tow. Their amenities are limited, but if you don’t want a tent vacation, trailers offer comfortable sleeping options.

A travel trailer can best be described as a motor home without the engine attached. These trailers will often have a separate bedroom, and often two. The larger models feature separate sleeping and dining quarters, as well as a living area with televisions, couches and chairs. They will have a full-function stove and oven, as well as a refrigerator. Travel trailers are available in lengths of up to 40 feet, and the larger the trailer is, the more amenities it will house. The largest models can have two bathrooms, can weigh as much as 6 tons and require a heavy-duty pickup truck or SUV to pull them effectively. 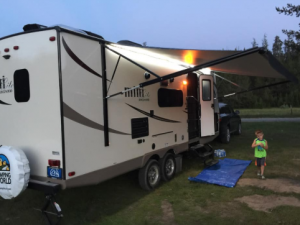 Pop-up campers are wildly popular for short camping adventures. Pop-up campers are small and light enough to be pulled behind a mid-sized car, and they are compact enough to fit in most standard campgrounds. Typically measuring less than 10 feet in length and 4 feet in height in their closed state, they can house a surprising number of amenities. When the destination is reached, you unhitch the camper from the car and raise the roof to its full height. When deployed, a pop-up camper will have an interior tall enough for a 6-foot-tall person to stand comfortably. Air-conditioning, heating and a gas stove are standard in many pop-up models, and larger models can include separate shower and toilet facilities as well as sinks and several beds. The sleeping areas in a pop-up camper are located at each end, on fold-out extensions covered by a tent-like enclosure.